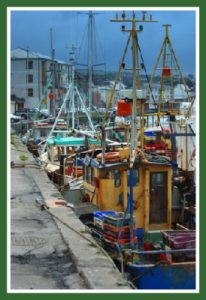 Fishing plays a vital role in the cultural and economic fabric of the Gulf of Maine region, with the identity and current-day economy of many of its coastal communities deeply tied to fishing and to iconic species such as cod and lobster. As one of the oldest European settlement areas in North America, the Gulf of Maine’s fisheries have been historically important. The cod fisheries helped feed Europe’s industrial revolution and were an important part of the 17th through early 19th Century’s trade routes between Africa, the Caribbean, North America and Europe.

Over the past 20 years there has been reduced commercial fishing in this region due to stock depletion cause by a variety of factors, including over-fishing, migration, climate change, and water pollution. Groundfish stocks in the Gulf of Maine have become severely depleted and there is a greater reliance on the harvesting of lobster and other invertebrates. As a result, traditional maritime-oriented ways of life are in decline, changing the face and structure of many coastal communities.

Aquaculture as a form has been practiced in the Gulf of Maine region for over a century, including both finfish and shellfish culture. Marine aquaculture as an industry however, is relatively new and dates to the early 1970s. New Brunswick is the largest producer of aquaculture products, followed by Maine, Nova Scotia and Massachusetts. Aquaculture species include Atlantic salmon, oysters, clams, mussels, and more recently the culture of Atlantic halibut, Atlantic cod, Atlantic and shortnose sturgeon, bay scallop, the giant scallop, and kelp have been investigated.

Two theme papers have been identified that will be developed for the State of the Gulf of Maine Report:

In addition to the Actions and Responses described in each theme paper, many different organizations have developed guidelines, codes of conduct, best management practices, or other types of advice aimed at addressing the issues described in the theme papers. Some of the guidelines related to Fisheries and Aquaculture can be found here. These links are maintained by outside agencies and are provided for information purposes. The linked documents are not endorsed by the Gulf of Maine Council on the Marine Environment.