Humans have been an integral part of the Gulf of Maine since the earliest native settlers in the region. The initial influx of people to the Gulf of Maine began approximately 12,000 years ago. It is only in the last 500 years, however, that the region has witnessed extensive coastal settlement and development.

European settlers were first drawn to the Gulf’s shores in search of fortune, religious freedom or a new life. Settlements grew up near natural salt and fresh water marshes. In the upper reaches of the Bay of Fundy, a vast network of dykes was constructed to convert tidal salt marshes into farmland. Cod was plentiful and well-suited to salt curing, which was essential for the long shelf-life necessary for export. Salt, hay and cod were the first steps in a maritime enterprise that would bring the region two centuries of prosperity. By the 1730s, shipbuilding in the Gulf grew up to support the salt cod trade with Europe.

Spurred on by the Industrial Revolution that was taking hold in Great Britain, entrepreneurs in the Gulf began to develop an industrial base of their own in the late 1790s. New England inventors and entrepreneurs transformed old mercantile cities into manufacturing centers. Fuelled by industrialization of its shores, after 1880, farms declined in size and the number and size of urban areas expanded. By 1940, two-thirds of the population lived in coastal counties of the Gulf in a limited number of urban centres. People continued to migrate from rural to urban areas, following employment opportunities and services.
Modern Day 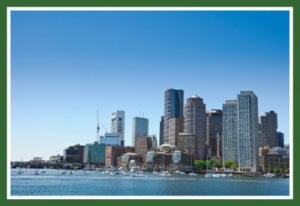 Major trends for the Gulf of Maine region are urbanization (the migration from rural to urban centres) and urban sprawl (low-density development of suburbs). Growth projections for the coast of Maine categorise nearly all of it as “suburban” by year 2050. Coastal areas, with prime recreational opportunities and waterfront lands, are becoming increasingly popular settings for retired and seasonal residences. Seasonal dwellings along the coast now represent almost one third of the housing stock in some areas.

A summary of coastal development in the Gulf of Maine and it effect on the environment is provided in Tides of Change Across the Gulf (Pesch and Wells 2004).

One theme paper has been identified for the State of the Gulf of Maine Report:

In addition to the Actions and Responses described in each theme paper, many different organizations have developed guidelines, codes of conduct, best management practices, or other types of advice aimed at addressing the issues described in the theme papers. Some of the guidelines related to Coastal Development can be found here. These links are maintained by outside agencies and are provided for information purposes. The linked documents are not endorsed by the Gulf of Maine Council on the Marine Environment.