On March 7, 2007 the Musquash Estuary was designated a Marine Protected Area (MPA) through regulations under Canada’s Oceans Act. This estuary is located along the northern shore of the Bay of Fundy approximately 20 kilometers southwest of Saint John, New Brunswick (Figure 1). It is a unique habitat due to its size, expansive salt marsh, and relatively undisturbed natural condition (Figure 2). Estuaries such as this are considered an important component to the health of the Bay of Fundy and Gulf of Maine ecosystem and as such conservation objectives for this MPA are to ensure that there is no unacceptable reduction or human-caused modification in three ecosystem components.

Productivity: so that each component (primary, community, population) can play its role in the functioning of the ecosystem by maintaining abundance and health of harvested species;

Biodiversity: maintaining the diversity of individual species, communities, and population with the different ecotypes; and

Habitat: in order to safeguard the physical and chemical properties of the ecosystem by maintaining water and sediment quality. 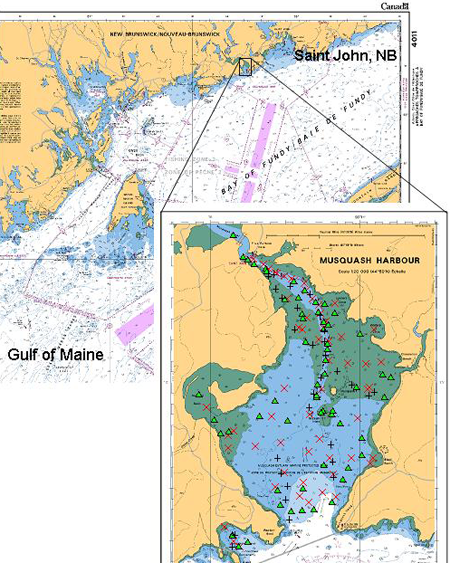 Figure 1. Map of the Musquash Estuary and Harbour indicating the location of benthic grab stations that have been sampled to establish a baseline of benthic macrofauna: 2010 red x; 2011 green diamond; 2012 black cross.

Dr. J. Andrew Cooper is a Fisheries and Oceans research scientist stationed at the St. Andrews Biological Station, St. Andrews, New Brunswick. Dr. Cooper and his colleagues are currently developing a monitoring plan that incorporates baselines of physical, chemical and biological information upon which to monitor short and long-term changes for these three ecosystem components. Under the biodiversity component, Dr. Cooper has been sampling the benthic macrofuana within the Musquash MPA.

“By using a small benthic grab and a small vessel we have been able to navigate the narrow channel and intertidal mudflats of the estuary throughout the year”, says Dr. Cooper. Over 206 different species and 103,714 individuals have been identified and counted from the 150 stations that have been sampled over the last three years (Figure 1). The majority are nematodes and several species of polychaete. These animals play an important role at the base of the food chain within a tidal estuary such as Musquash. Not only do they consume large quantities of nutrients that accumulate on the bottom, but they also create a stable habitat and food source for other animals. Not surprisingly, there is a strong association between dominant species assemblage and habitat as well as some natural variations both seasonally and from year-to-year. The goal is to understand how to best monitor this level of species diversity and to improve our understanding of how this estuary functions as an ecosystem by incorporating biological, physical, and chemical information that is being collected by a team of Fisheries and Oceans scientists. 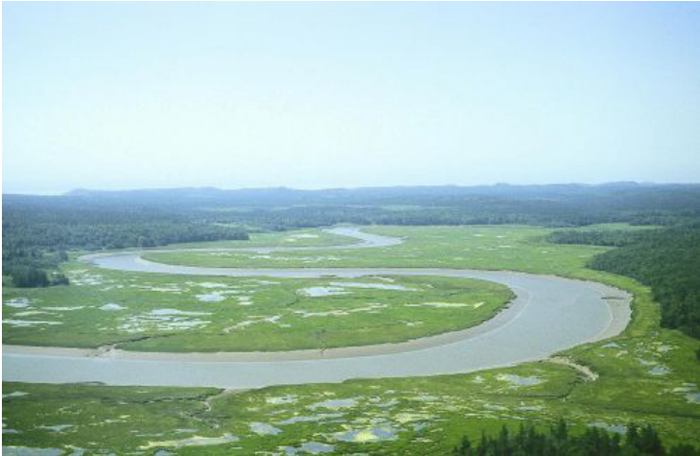 For more information about the Musquash Marine Protected Area go to http://www.mar.dfo-mpo.gc.ca/Musquash-MPA and the Canadian Science Advisory Secretariat http://www.dfo-mpo.gc.ca/csas-sccs/Publications/SAR-AS/2011/2011_040-eng.html.