Estuarine condition is a function of the geophysical nature of the estuary, the larger ocean and atmosphere, and the upstream watershed. To fully understand and predict how an estuary will respond to drivers and pressures, each compartment must be characterized. For example, eutrophication and associated habitat effects are generally well known; what is less understood is how the particular attributes of estuarine watersheds and their spatial distributions relate to downstream estuarine conditions.

In 2014 ESIP began working with EPA’s Office of Research & Development on a project to describe the relationship between watershed characteristics and downstream estuary conditions in the northeast. Geographically the project stretches from Greenwich Cove, Connecticut to Annapolis River, Nova Scotia. The project aims to evaluate relationships between ecosystem state and impact variables (e.g., water clarity, chlorophyll-a) and watershed driver and pressure variables (e.g., land use magnitude and spatial distribution, nutrient loading). An extensive effort was put into identifying sources of explanatory variable data (including American Indian and First Nations efforts). The expectation is that this research will help with connecting watershed drivers to estuarine condition and ultimately to important ecosystem services.

This research utilizes a design based on a gradient of watershed drivers and pressures that will affect the estuaries being studied; therefore, a subset of estuaries will be in the category of least impacted and perhaps reference or normative condition (i.e., healthy characterized by the essential ecological attributes described by EPA’s Healthy Watershed Initiative). Thus, it will be possible to evaluate the degree to which estuary conditions change in relation to human affected watershed characteristics. 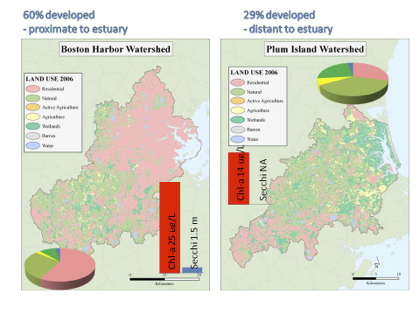 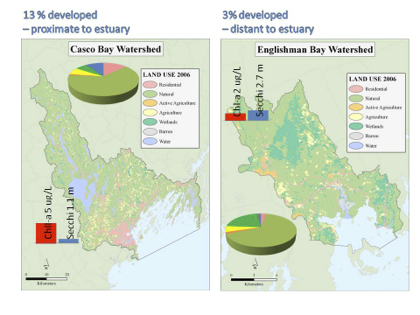