The amount of impervious surface in a given watershed affects how much precipitation will be absorbed or will runoff of the land surface because impervious surfaces prevent water from infiltrating into the ground and promote runoff. These surfaces are composed of materials such as asphalt and concrete. With increased amounts of impervious surface area in a watershed, there is an increased risk of contaminants draining into rivers and coastal waters, thus degrading the ecosystem. Prior to this study, no maps existed depicting the amount of impervious surface area in Nova Scotia. As part of Canada’s commitment to protecting and enhancing marine habitat in the Bay of Fundy and Gulf of Maine, Environment Canada commissioned this project to develop a method and map these impervious areas for Nova Scotia using satellite imagery. Researchers at the Applied Geomatics Research Group (AGRG), Nova Scotia Community College collaborated with the United States Geological Survey (USGS) to develop a method using a combination of high resolution satellite data ca. 1-4 m and freely available Landsat imagery ca. 30 m to map the entire province of Nova Scotia with special emphasis on the watersheds surrounding the Bay of Fundy. Small representative areas (2 km X 2 km) were extracted from the high resolution imagery (Ikonos, Quickbird and World View-2 satellite data) and were classified to map the developed areas. These maps were then used to calculate the percentage of impervious area within a 30 m pixel representing the Landsat image. The signatures of the developed areas were then applied to the entire Landsat scene to map all the developed areas and the percentage of impervious material. This map then needed to be refined to eliminate fallow agricultural fields and forest clear cuts that appeared as developed areas on the Landsat image. The production of a final map that spatially details the amount of impervious surface material for the Nova Scotia watersheds provides the basis for the assessment of the potential amount of runoff into rivers and coast waters from the uplands. This information can be used to assess the risk of contaminants effecting aquatic ecosystems and help protect critical habitat. The resultant GIS layer will act as a baseline of information that represents the spatial distribution of impervious material for 2005 (with some exceptions for areas where 2007 data had to be used) and can be used in the future to track the changes in development and the amount of impervious material (Figure 1). This project has demonstrated an innovative approach to mapping the percentage of impervious surface area using multi-source remote sensing data and refinement using GIS databases to produce a high quality information product that can assist in the protection of our ecosystems and allow for better landuse planning in the future. 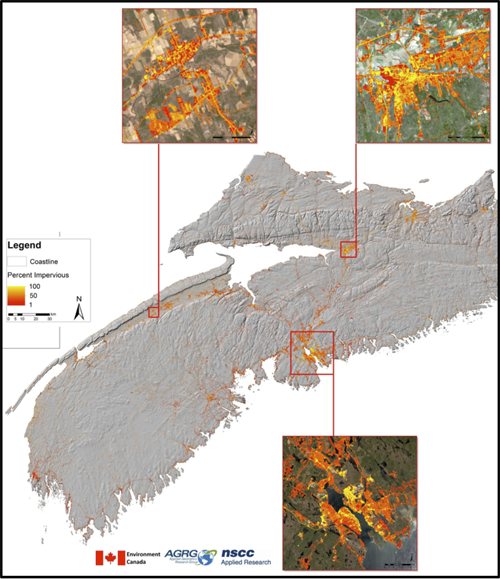 Figure 1 Part of the GIS map layer of percentage of impervious surface area for the area of Nova Scotia surrounding the Bay of Fundy. Impervious area in yellow-orange over grey scale shaded relief topography with inset maps of Landsat imagery (2013) and the impervious surface material derived from 2005-2007 Landsat imagery. Top left inset is the area of Middleton where AGRG is located, upper right inset is Truro and lower inset is Halifax.