The New England Aquarium (Boston, MA) has been conducting vessel surveys to monitor the population of right whales in the Bay of Fundy annually since 1980.  The Bay of Fundy is one of five seasonal critical habitat areas for the species along the eastern seaboard of Canada and the United States; and is considered an important seasonal feeding area and nursery area for mothers and calves. Right whales are individually identified using photographs of the pattern of callosities on the top and side of their head and other features such as ventral pigmentation and scars.  A catalogue of identified individuals (n=~510 living individuals as of November 2012) is curated at the New England Aquarium which permits scientist to track reproduction, distribution, life history of individuals, scarring, health and behaviour.  http://www.neaq.org/conservation_and_research/projects/endangered_species_habitats/right_whale_research/index.php 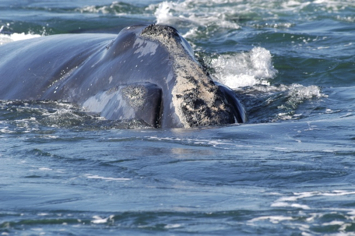 The head and callosity pattern on the rostrum of a right whale swimming toward the photographer (M. Brown, New England Aquarium).

Over the 34 years of summer and fall surveys there has been a lot of variation in the number of right whales recorded using the Bay of Fundy.  During the early years, from 1980 to through 1992, right whale numbers ranged from a low of 24 individuals in 1980 to a high of 74 in 1989.  For the next 10 years, 1993 through 2002, the annual count ranged from 72 to 215 individuals.  For the last ten years, we have typically seen more than 100 individuals until only 66 were counted in 2010, 42 in 2012 and the most surprising of all were the only five right whale recorded during our surveys and only 11 individuals total from all sources in 2013 (shown as a blue dot in the figure 1)!

Although we do not sample the plankton resource during our monitoring surveys, net tows conducted by researchers at the Grand Manan Whale and Seabird Research Station resulted in virtually no copepods at stations where they had been abundant in previous years. It is well known from plankton research in the other habitat areas that right whales respond to the availability of the food resource in their critical habitats; they have been known to abandon known habitat areas in years when food was in low abundance. Right whales clearly responded to changes in the food resource in the Bay of Fundy, but we simply do not know where they were in the summer and fall of 2013. There were some interesting opportunistic sightings between May and November that provide us with some clues: sightings south of the Bay of Fundy, in the Gulf of St. Lawrence, near Cape Breton, and off North Carolina, Virginia and New York. The repeated sightings off the mid-Atlantic in the summer are particularly unexpected, and most of these were far from shore on the edge of the continental shelf. The questions in our minds is how will this shift in distribution affect their ability to get enough high quality food and how will it affect their overall health and reproduction the years to come? How can we alter our research strategy to locate right whales when they change their pattern of distribution?

Since our 2008 Bay of Fundy field season, researchers have chronicled their work for the public through our blog postings which can be found at: http://rightwhales.neaq.org/