Background on the DAMOS Program

The dredging of New England waterways and harbors to allow safe navigation and commerce dates back well over a hundred years.  As part of the overall awakening of environmental awareness that took place in the 1960’s and 1970’s, there was a growing concern about the disposal of dredged material into the aquatic environment.  In addition to requirements put in place by the Environmental Protection Agency regarding the type of material that could be placed at an aquatic site and the required sampling and testing, the Corps of Engineers New England District supported a number of investigations that helped establish the foundations of our knowledge on dredged material disposal impacts in an open-water environment.  The Disposal Area Monitoring System (DAMOS) Program was initiated in 1977 by the New England District Corps to manage dredged material disposal sites and minimize any impacts from placement of dredged material to the overlying waters and surrounding habitat.

DAMOS is a long-term monitoring program that relies on a series of indicators to track conditions at dredged material disposal sites.  The most commonly collected indicators are acoustic data collected remotely from a vessel at the surface and photographs taken at the seafloor.  Acoustic data is collected using a multi-beam fathometer to map the placement of dredged material on the seafloor and the long term stability of deposits. Plan-view and sediment-profile imaging provide images looking down at the seafloor and across the sediment-water interface to characterize both physical conditions and the biological community of the seafloor. 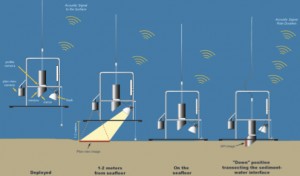 1. Conceptual schematic of the operation of the plan view and sediment profile imaging camera system (Germano and Associates)

The DAMOS Program tracks dredged material placement at all aquatic sites within New England waters. Specific sites are selected for monitoring each year based on the recent history of placement.  Two Maine sites were monitored in the late summer of 2012; the Eastern Passage Disposal Site in Blue Hill Bay had recently received material from the dredging of Bass Harbor, and the Machias Bay Disposal Site had recently received material from the dredging of Bucks Harbor. Standard survey techniques of bathymetry and imaging were employed. 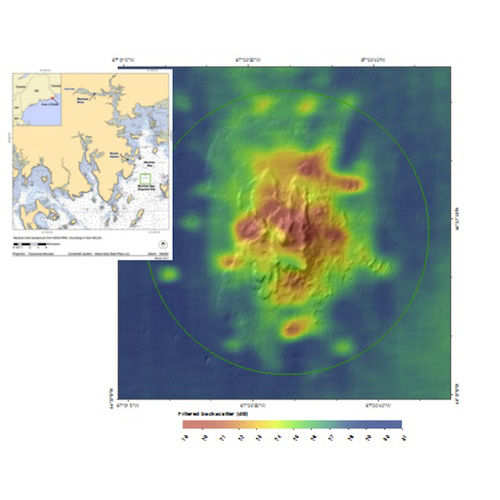 2. Inset shows the location of the survey area over the Machias Bay Disposal Site.  The multi-beam image displays color-coded surface texture (backscatter) over vertically exaggerated bathymetry of the mound formed from the placement of dredged material.

These surveys confirmed the correct placement of material at the sites and identified healthy, robust benthic communities that had recovered to a stage identical to that of the surrounding areas as expected. 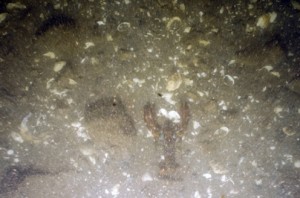 The DAMOS Program returned to Maine waters in August 2013. In preparation for the possible reopening of a historically used site, the Cape Arundel Disposal Site was monitored with standard acoustic and imaging techniques.  In addition, a potential site in upper Penobscot Bay was evaluated using standard techniques and collection of sediment samples for physical and benthic community analyses. For more information, contact the DAMOS Program Manager, Steve Wolf at steven.wolf@usace.army.mil, and reports for this work can be found at: