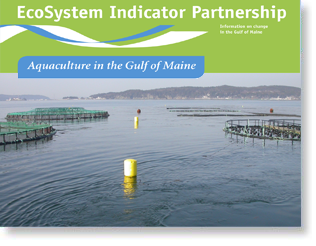 The aquaculture industry has had a home in the Gulf of Maine/Bay of Fundy for decades, with oyster sites cultivated in Nova Scotia for nearly a century. In its current form, the industry began in the 1970s. Despite its importance to local economies and debated impacts to the environment, the roles of the numerous agencies that monitor sites are difficult to identify and understand as is the true density of aquaculture in the region. 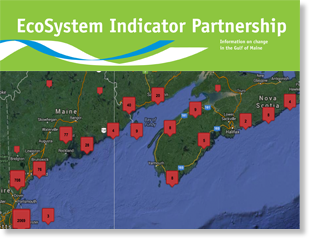 The Gulf of Maine Council’s EcoSystem Indicator Partnership (ESIP) was created in 2006 to assess the health of the Gulf of Maine. This introductory fact sheet describes the process used to select appropriate indicators for looking at change in the Gulf of Maine/Bay of Fundy. 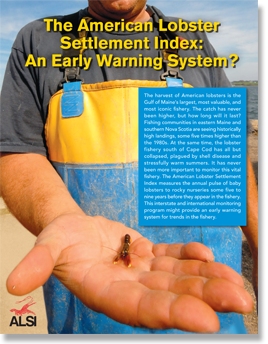 The harvest of American lobsters is the Gulf of Maine’s largest, most valuable, and most iconic fishery. The catch has never been higher, but how long will it last? Fishing communities in eastern Maine and southern Nova Scotia are seeing historically high landings, some five times higher than the 1980s. At the same time, the lobster fishery south of Cape Cod has all but collapsed, plagued by shell disease and stressfully warm summers. It has never been more important to monitor this vital fishery. The American Lobster Settlement Index measures the annual pulse of baby lobsters to rocky nurseries some five to nine years before they appear in the fishery. This interstate and international monitoring program might provide an early warning system for trends in the fishery.